I Went Zero Carb and My Total and LDL Cholesterol Went Really High! Is That Dangerous? No! 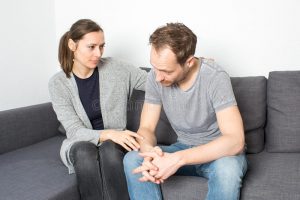 In my 5 years of experience blogging on Low Carb, High Fat and Zero Carb diets I have seen a consistent pattern.  what I regularly see is that a person’s weight, Hemoglobin A1c (a measurement of the average blood sugar for the last 90 days), Triglyceride levels, and C-Reactive Protein (a measurement of overall body inflammation) all go down while the beneficial HDL Cholesterol shoots up.  But in most cases the “suspect” LDL and Total Cholesterols often go up, usually dramatically by current recommended standards.   The next thing I hear is that an uncle who is a doctor or a cousin who is a nutritionist says “you have to go low fat, high fruit, high whole grains or you will soon have a heart attack. I would like to explain why in my opinion Total Cholesterols in the range of 200-400 mg/dl (5.172-10.34 mmol/l) and LDL Cholesterols in the range of 130-300 mg/dl (3.362-7.758 mmol/l) are quite healthy and normal.  I plan to include all the scientific articles and charts I have collected over the years on the subject in case people would like to show it to their medical providers to start a conversation about the subject with their own medical provider.

I think for most people, one goal of going on a low carb, high fat diet is to lower heart attack risk.  the combination of lowering Triglycerides and elevating HDL Cholesterol seen on low carb diets lower heart disease risk more than simply lowering LDL Cholesterol.  Here is a table from this article in the Journal Circulation: 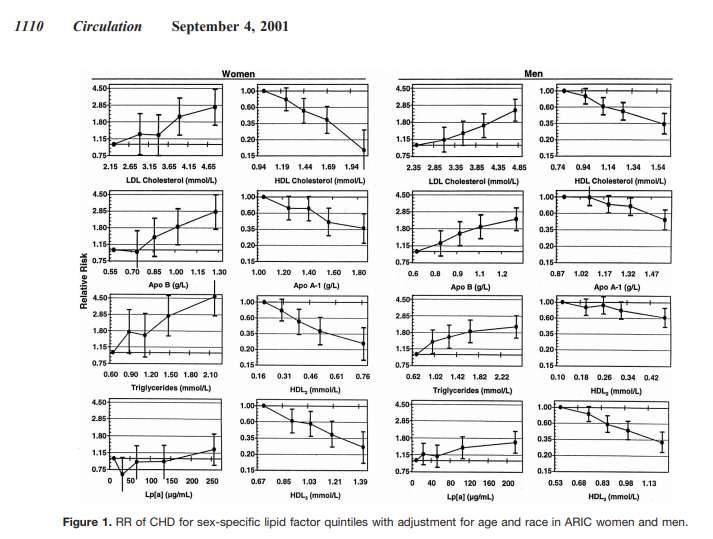 What you will see is that if you drop your LDL Cholesterol from the highest group to the lowest risk group your relative risk of heart disease decreases from 2.5 to 1 in men and from 2.85 to 1 in women, a decrease of risk by 2.5 times and 2.85 times for a woman.  If you raise your HDL Cholesterol from the lowest group to the highest group your relative risk goes from 1 to 0.35 in a man and from 1 to 0.17 in women, lowering you risk by 3 times in a man and over 5 times in a woman. In the same way lowering your triglycerides from the highest risk group to the lowest decreases the risk factor by 2X for a man and 4.5X for a woman. Here’s a summary of that data:

So a man who goes on a Low Carb, High Fat diet and optimizes HDL and Triglycerides can get a total decrease in heart risk of 5X and a woman can get a 9.5X risk reduction. However if our low carb dieter were to follow the advice to add back carbohydrate he would see his triglycerides rise.  Here’s a quote from this article in the Journal of Nutrition:  “When the content of dietary carbohydrate is elevated above the level typically consumed (>55% of energy), blood concentrations of triglycerides rise. This phenomenon, known as carbohydrate-induced hypertriglyceridemia, is paradoxical because the increase in dietary carbohydrate usually comes at the expense of dietary fat. Thus, when the content of the carbohydrate in the diet is increased, fat in the diet is reduced, but the content of fat (triglycerides) in the blood rises.”  Also as carbohydrate intake increases HDL Cholesterol goes down.  Here’s a quote from this article in the Journal of the American College of Nutrition:  “there was an inverse association between percentage of calories from carbohydrate and HDL-C levels.” So by taking the advice to add back carbohydrate a person inevitably sees his HDL and Triglyceride levels reflecting a higher risk of heart disease.

The reason I feel that the LDL elevation is not a significant problem is that all LDL Cholesterol particles are not created equal and range in size from large and fluffy to small and dense.  The small dense variety is much more highly associated with heart disease.  One of the best ways to tell if your LDL particles are the beneficial large fluffy kind is to look at the ratio of the triglycerides divided by the HDL Cholesterol.  The lower this number is the more likely the LDL particles are to be the healthy large fluffy variety.  And as we saw above Low Carb, High Fat diets drive the HDL up and the Triglycerides down sending this ratio in the right direction while a high carb diet does just the opposite increasing our heart disease risk.  In the table below you can see that the Triglyceride/HDL Ratio is the best predictor of whether you have small dense LDL (sdLDL) 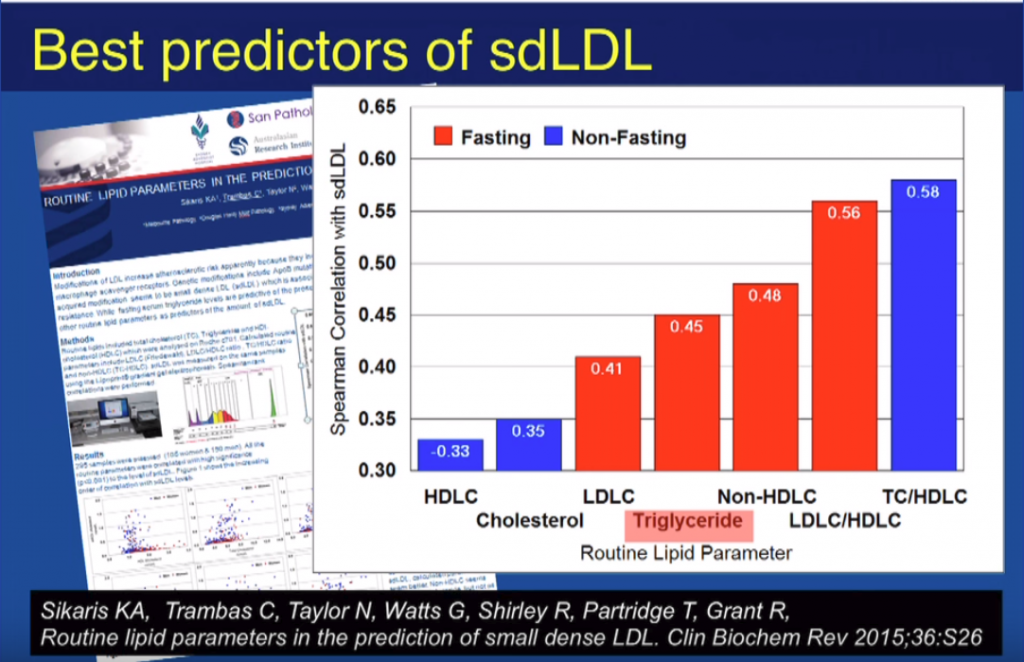 As for having a very high Cholesterol, I love this study of Japanese men in Hawaii where they measured their Cholesterol every year for 20 years and found that the higher the Cholesterol levels were the longer they lived.  It obviously wasn’t the result they were looking for because here is a quote from their conclusion:  “We have been unable to explain our results. These data cast doubt on the scientific justification for lowering cholesterol to very low concentrations (<4·65 mmol/L) in elderly people.”  People who recommend low fat diets to lower Total and LDL Cholesterol have a lot of trouble explaining this study of 68,094 people who were 60 years of age and older published in the British Medical Journal recently which showed that the higher their LDL and total Cholesterol was, the less likely a person was to have a heart attack or Alzheimer’s and the longer he was likely to live.  So I personally couldn’t imagine why anyone over 60 would consider lowering their LDL and total Cholesterol with a low fat diet in light of this study.

So why do the articles in Major Scientific Journals recommend low fat products and statin medications?  In my opinion much of it is driven by money from the processed food manufacturers and and pharmaceutical companies.  Another thing I have noted is that many researchers are vegetarian for either moral or religious reasons and I feel this tends to produce strong “confirmation bias” in these researchers and practitioners.   Here is an example from this articles in the British Medical Journal from 2017 on how much the editors of the major medical journals and the gatekeepers of what research is and isn’t published receive from the pharmaceutical industry:

​Please note at $475,072 in general pay and $119,407 in research grants, the editors of the Journal of the American College of Cardiology that controls publication of articles on statin medications and the use of polyunsaturated cooking oils produced by agribusiness are recompensed quite handsomely.

As a retired family medicine doctor who twice passed the board certification exam, the body of scientific evidence I have found clearly supports the points I have made above.  I welcome anyone to challenge my positions point by point in the comments.  I will not post comments that are vague, rambling and do not address a particular point I have made but I will certainly allow and comment on posts that address a particular point and include scientific evidence to support or refute it. 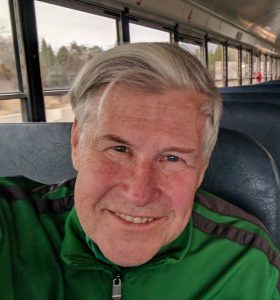 If you missed my last post called “How an All Meat Diet Can Reverse the Autoimmune Diseases Caused by Leaky Gut” you can view it by CLICKING HERE.