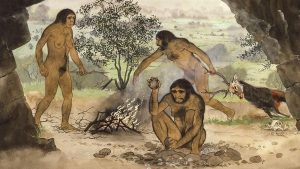 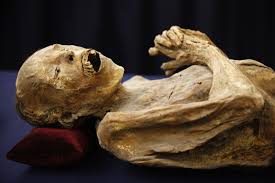 Many vegans and vegetarians will point to an article in the Lancet from 2013 entitled “Atherosclerosis across 4000 years of human history: the Horus study of four ancient populations” as proof that ancient peoples who ate a diet high in meat developed heart disease eating meat because calcifications were seen in the coronary arteries of all these peoples.  You can download the article by clicking here.  When I examine the same data I come to exactly the opposite conclusion.   They obtained mummies from 4 different civilizations:  Egyptians, Peruvians, Puebloans of Southwest America and Unangan Eskimos of the Aleutian Islands. 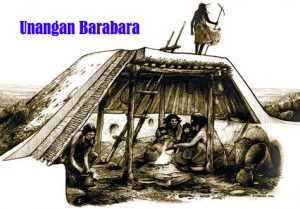 That leaves the 51 Unangan Eskimos and 1 Inuit eskimo they obtained from the National Museum of Natural History which they list as hunter-gatherers.  First the mummies are recent having died between 1850-1900 less than 200 years ago and thus almost certainly had had contact with European Culture.  Here’s a quote from this article:  “European whalers regularly travelled to the Arctic in the late 17th and 18th century. When they visited, they introduced tobacco to Inuit.”  It would be very hard to determine if these people might also have come into contact with European foods and sugar.  Here’s the description they list for their Aleutian mummies. 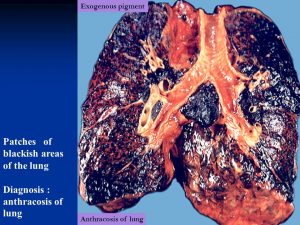 Also there is another more plausible explanation for their coronary artery plaques:  “second hand smoke”.  Here’s a quote from the study  I mentioned in the first paragraph:  “The Unangans in particular, were exposed to smoke within their living quarters. Entry into a barabara was through a hole in the roof via a slated timber, through which the inhabitant climbed. Seal and whale oil lamps lit and heated their subterranean sod homes. Laughlin27 described the soot inside as so heavy at times that children’s faces needed to be wiped from the accumulated soot in the morning. In his two autopsies of Unangan18,19 and of the Inuit woman,20 all of whom had atherosclerosis, Zimmerman described extensive pulmonary anthracosis in each.  Although cigarette smoking was not part of these four  ancient populations, the need for fire and thus smoke inhalation could have played a part in the development of atherosclerosis.” “Pulmonary Anthracosis” means finding lots of black soot in their lungs which could have come either from the lamps, fires and tobacco use or all three. 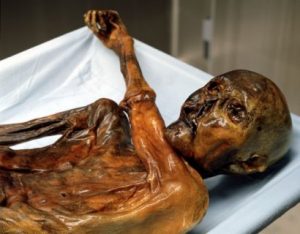 Sometimes the folks trying to discredit hunter-gather diets bring in Ötzi, “The Iceman” a frozen human found in the Tyrolean Mountains on the border between Austria and Italy that also had plaques in his heart arteries.  He was judged to be 5300 years old making his era about 3400 BCE.  Most experts feel agriculture had reach Europe almost 700 years before that according to this article.  And Ötzi himself suggests they are right.  Here’s a quote from the Wikipedia article on Ötzi’s last meal (a sandwich):  “Analysis of Ötzi’s intestinal contents showed two meals (the last one consumed about eight hours before his death), one of chamois meat, the other of red deer and herb bread. Both were eaten with grain as well as roots and fruits. The grain from both meals was a highly processed einkornwheat bran,[14] quite possibly eaten in the form of bread. In the proximity of the body, and thus possibly originating from the Iceman’s provisions, chaff and grains of einkorn and barley, and seeds of flax and poppy were discovered, as well as kernels of sloes (small plumlike fruits of the blackthorn tree) and various seeds of berries growing in the wild.[15] Hair analysis was used to examine his diet from several months before.  Pollen in the first meal showed that it had been consumed in a mid-altitude conifer forest, and other pollens indicated the presence of wheat and legumes, which may have been domesticated crops. Pollen grains of hop-hornbeam were also discovered. The pollen was very well preserved, with the cells inside remaining intact, indicating that it had been fresh (a few hours old) at the time of Ötzi’s death, which places the event in the spring. Einkorn wheat is harvested in the late summer, and sloes in the autumn; these must have been stored from the previous year.” 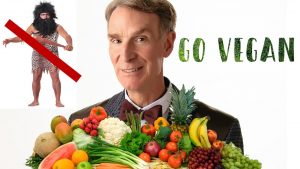 I have seen the above evidence used time after time to try to sabotage the Evolutionary Diet Theory that primates evolved over millions of years eat a primarily meat based diet.  To me it’s very weak evidence at best. There is however very strong evidence to suggest that humans up until about 10,000 years ago ate primarily meat.  They have found well preserved bone marrow from humans up to 100,000 years old and can use Isotope studies tell exactly what kind of foods they were eating and it was meat.  Here’s a quote from this article in the Journal Nature: 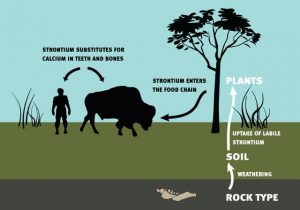 “The use of bone collagen stable isotope analysis avoids many of the problems outlined above. Collagen has been found to be well preserved in bones up to 100 000 years old (Bocherens et al, 1999; Ambrose, 1998) and, through checks of the quality of the collagen such as the C:N ratio and amino acid analysis, it is possible to discard poorly preserved and contaminated collagen (DeNiro, 1985). The earliest hominids that this method can be applied to are the Neanderthals, and there have been three studies carried out so far. The first application of collagen isotope analysis to early hominids was by Bocherens, at the site of Marillac Cave in France, to two Neanderthals that were approximately 40 000–45 000 y old (Bocherens et al, 1991; Fizet et al, 1995). The next study was also by the same group, of a Neanderthal from Scladina Cave in Belgium, dating to approximately 130 000–80 000 y old (Bocherens et al, 1999). The third study was by Richards et al (2000b), of the two youngest dated Neanderthals in Europe, ca 28 000 years old, from Vindija cave in Croatia. In all of these studies the collagen δ13C and δ15N values of associated herbivores and carnivores were measured to build up a picture of the ecosystem isotope values. In all three studies the Neanderthal δ13C and δ15N values were compared with contemporary species of known diets and in all cases the Neanderthals, based on the δ13N values, were most similar to top-level carnivores. This means that, for these five individuals from three different areas of Europe and ranging in age from approximately 100 000 to 28 000 years old, there is a remarkably similar adaptation. These five Neanderthals were all top-level carnivores who derived the vast majority of their protein from animal sources, likely to be large herbivores.

“There have only been two studies of Palaeolithic modern humans, Homo sapiens sapiens. A study of the isotope values of humans from the late Upper Palaeolithic (ca 13 000 years old) site of Gough’s and Sun Hole Cave in Southern England (Richards et al, 2000a) indicated, again by the δ15N values, that the main source of dietary protein was animal-based, and most likely herbivore flesh. The second study (Richards et al, 2001) was a survey of isotope values of humans from Gravettian and later (approximately 30 000–20 000 years old) Eurasian sites. The δ13C and δ15N values here indicated high animal protein diets, but the type of animal protein was more varied than the Neanderthals, incorporating aquatic foods in their diets. As this study was a survey, and associated faunal δ13C and δ15N values were not measured, it is not possible to further pinpoint the sources of dietary protein at all of these sites. Interestingly, this adaptation to aquatic resources becomes more extreme in much later (ca 10 000–5000 BP, depending on area) Mesolithic periods in parts of Europe. For example, isotope studies of Mesolithic humans from the Danube Gorges in Southeastern Europe indicate that the majority of protein was from freshwater fish, which is supported by the archaeological evidence of fishing equipment and large numbers of fish bones (Bonsall et al, 1997). Also, on the Atlantic coast of Europe in the Late Mesolithic a range of isotope studies have also found a significant use of marine foods, and in some regions such as Britain and Denmark, marine fish were the main protein source (Richards & Mellars, 1998; Tauber, 1981).” 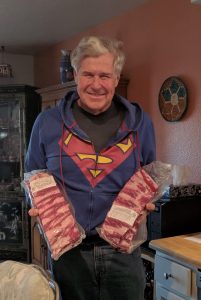 Thus from my studies of the relevant data a primarily meat based diet seems to be what the human species has evolved to eat and supports the assumption that the switch to a grain and plant based diet may well have contributed to many of the diseases found much more frequently in agricultural societies like diabetes, heart disease, dementia and cancer.  Michael Eades, M.D. makes that case eloquently in his post “Obesity in Ancient Egypt”.  Another reason why I think meat is the most nutritious food humans can consume!