There’s a Raging Epidemic – What Can You Do to Protect Yourself and Your Loved Ones?

The Metabolic Syndrome may not kill as fast as Ebola but ~2/3rds of people have it! 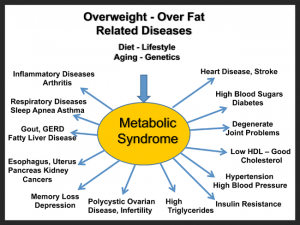 What is the Metabolic Syndrome?  In 1977 Herman Haller noticed that people who were having heart attacks had common cluster of symptoms including central obesity, high blood pressure, high blood sugars, high serum triglycerides and low HDL Cholesterol Levels (notice LDL Cholesterol the supposed “bad Cholesterol” was not mentioned).  This cluster of symptoms became known as “The Metabolic Syndrome”.  Research since has shown that the metabolic syndrome starts with increased Abdominal fat (Viceral fat – around and in the internal organs of the gut like the liver, kidneys and pancreas).  This causes the release of multiple “inflammatory mediators” that cause “insulin resistance”.  This then leads to the other symptoms of the syndrome and with time inevitably to pre-diabetes and diabetes.  Here’s a quote from the Wikipedia on the Metabolic Syndrome “It is common for there to be a development of visceral fat, after which the adipocytes (fat cells) of the visceral fat increase plasma levels of TNF-α and alter levels of a number of other substances (e.g., adiponectin, resistin, and PAI-1). TNF-α has been shown not only to cause the production of inflammatory cytokines, but also possibly to trigger cell signaling by interaction with a TNF-α receptor that may lead to insulin resistance”.  In 2012 the CDC estimated 34.2% of Americans had the Metabolic Syndrome in this Study.  I think the number is much higher as the CDC also just released this report showing that 40% of all adults and 19% of children in the US are obese and anyone categorized as obese is assumed to have the metabolic syndrome.  You can also be thin and have the metabolic syndrome.  This is called TOFI (Thin on the Outside, Fat on the Inside referring to Viceral fat).

What causes Metabolic Syndrome?  From my extensive study of the literature the only suspect that fits all the data I have seen is sugar.  Here’s a graph of how obesity has followed increase sugar use in the United States. 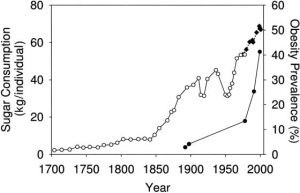 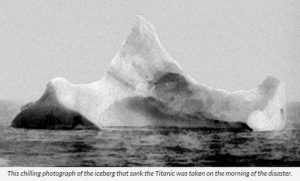 What is the financial cost of this Pandemic (worldwide epidemic)?  $245 Billion was spent on diabetes care alone in the US up from $174 Billion in 2007 (a 41% increase in 5 years).  $320 billion in healthcare costs and lost productivity can be linked to cardiovascular disease which is also primarily caused by the metabolic syndrome.  According to the World Health Organization the number of people in the world with diabetes has risen from 108 million in 1980 to 422 million in 2014.  According to the CDC “More than 100 million U.S. adults are now living with diabetes or prediabetes, according to a new report” Because of this in the United States our Medicare and Medicaid programs will soon be bankrupt without a massive infusion of funds that could significantly impair our economy.  The metabolic syndrome is making more and more workers unfit for work at a younger and younger age.  Likewise they are collecting benefits at a younger and younger age while our pharmacological treatments for diabetes while not curing the condition prolong their lives putting tremendous demands on the system that will down the road render it insolvent.  Everyone in the world needs to wake up to this disaster caused by sugar!  This is an “Iceberg Dead Ahead” Moment in history. 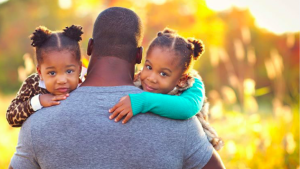 Because the metabolic damage can be permanent you may need to eat this way for the rest of your life.  Some people with mild early symptoms may be able to back off from these restrictions after the goal weight has been reached and the symptoms disappear.  The viceral and liver fat quickly respond to these approaches but sometimes the damage can remain for life the limitations need to continue.

Here is a list of some of the diseases linked to the Metabolic Syndrome.  Click on each disease for the article supporting the connection.

How does the Zero Carb diet (a diet of meat, eggs, cheese and butter) I follow fit into solving this problem?  I was a total sugar addict for 62 years.  The literature suggests that total abstinence is the most successful strategy for beating addictions to substances.  Zero Carb in my opinion has been shown to bring health and vitality and it completely elimintates sugar from the diet.

The bottom line is that the health and economy of the world is being wrecked by a substance at least as addictive as heroin or cocaine – SUGAR.  We all need to do something soon or the collision with the iceberg is inevitable! 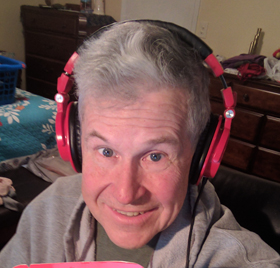 Click this link for information on the next free conference call