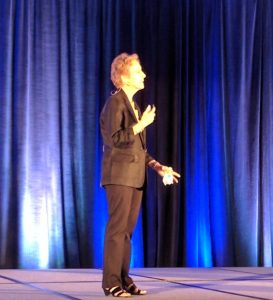 Jacqueline Eberstein was the nurse who worked hand in hand with Dr. Robert Atkins in his clinic for 29 years.  She is a font of low carbohydrate knowledge.  She spoke of having healthy babies on a low carb diet.  She showed evidence that the sperm of overweight men has epigenetic changes that tended to make their offspring have more of a tendency to be overweight.  She cited the alarming statistic that more than 50% of women in the us are either overweight or obese at conception putting them at high risk for gestational diabetes.    Gestational Diabetes increases the risk of Cesarian section, the risk of a life threatening complication of labor called Pre-eclampsia and also increases the risk of many other pregnancy related complications including premature delivery.  She pointed out that in NY State 2/3rds of maternal deaths are associated with obesity.

Problems continue after birth.  High insulin levels in women with gestational diabetes (18% in the US) can make breastfeeding difficult or impossible as good insulin regulation is required to produce adequate milk.  Mother’s high insulin levels have been transmitted to the baby during gestation and many of these babies are born insulin resistant.  The good news is that studies show that if mothers with gestational diabetes breast feed for just 3 months it can protect against progressing to adult diabetes by 15 years and decrease the risk of breast and ovarian cancers.  The breast fed babies have a lower risk of diabetes and obesity as well as SIDS and childhood leukemias. 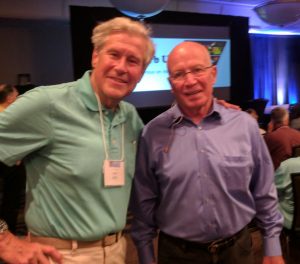 The next speaker was Cardiovascular Surgeon, Dr. Dwight Lundell another Low Carb Martyr.  4 years after retiring and writing a book called “The Cure for Heart Disease – Truth Will Save a Nation” urging people to go low carb and stop taking statins to prevent heart disease the Arizona medical establishment went back through his medical records found some questionable cases and removed his medical license in a Monkey Trial.  His lecture was on how it is high blood glucose levels cause heart disease by damaging the lining of the heart arteries.  It is this process called “endothelial dysfunction” that causes heart attack and high cholesterol levels have nothing to do with it.  The endothelial cells do not require insulin to let sugar in and so the level of insulin in these cells is always the same as in the blood stream.  High glucose in these cells causes high free radical production which leads to inflammation which leads the endothelial cells to produce proteins on their surface that call in infection fighting White blood cells called macrophages.  These macrophages migrate under the endothelial cells and watch for a germ or anything foreign that might be causing the inflammation.  LDL Cholesterol particles that have stayed in circulation too long because a high carb diet has eleveated the blood triglyceride level preventing them from reaching the size where they are normally taken up can be adulterated in many ways.  The longer they stay in circulation the more likely this is to occur.  For example glucose molecules can bind irreversibly to them as well as fructose, homocysteine and other oxydizing chemicals in the blood.  When this happens the Marcrophages see them as foreign invaders and eat them.  Macrophages in the artery lining full of these small dense LDL particles are called “Foam Cells” and are a large proportion of all coronary artery blockages (plaques).  In an attempt heal what the endothelial cells see as a wound, inflammatory mediators trigger the area to overgrow with smooth muscle cells that thicken and become a scar.  When one of these plaques ruptures the rough, inflamed inside surface triggers clot formation and the inflammation inhibits clot disolution.  The cornary artery in question becomes blocked and part of the heart starved for blood.  This is called a “heart attack”.  Statin medications like Lipitor and Crestor can prevent a very few heart attacks in people with a know history of heart disease probably because they are mildly anti-inflammatory at the cost of tremendous side effects including a 50% rise in the risk of diabetes.  Much better to prevent the route cause which is exposure of the lining of the heart arteries to high levels of glucose by going on a Low Carb, High Fat diet.  It was an honor to get to meet and speak with Dr. Lundell! 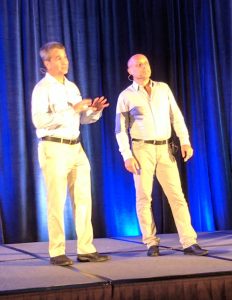 Ivor Cummins, a system engineer who has spent over 5 years investigating the literature supporting a low carb, high fat diet was next to speak.  He echoed Dr. Lundell’s message that LDL Cholesterol is an almost useless measure of a person’s risk for heart disease.  He highly recommends a Coronary Artery Calcium Score as an infinitely more reliable measure of a person’s cardiovascular risk and urges anyone at risk for heart to disease to get one done every 7-8 years, more frequently if it is elevated.  He also stressed the low carb high fat diet as the best solution to preventing heart disease.

He and Dr. Jeffrey Gerber, a Family Physician from Denver who practices low carb are writing a book together on this subject.  Dr. Gerber shared the other half hour in this segment then joined Ivor for questions.  His major point was that diabetes (poor control of blood sugar) really starts often 20-30 years before doctors currently diagnose it.  He cited the work of Dr. Joseph Kraft who showed that abnormal release of insulin in response to carbohydrate ingestion could be seen 20-30 years before the fasting blood sugars were finally abnormal and should be the gold standard.  He based this on over 15,000 insulin tolerance tests but like so many other low carb pioneers was ignored and ostracized by the anti-fat majority.  I am looking forward to the upcoming book by these 2 low carb visionaries. 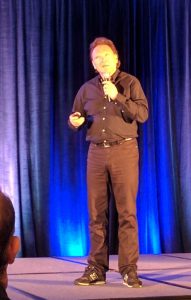 High blood sugars not only affect the heart arteries but also the liver.  This point was brought home by Dr. Nicolai Worm from Germany.  In this case the sugar fructose which is primarily found in fruits and table sugar is the primary culprit.  Since it can only be broken down in the liver, in the setting of a high carb diet it tends to be converted to fat and build up in the liver leading to Non-alcoholic Fatty Liver Disease which leads to diabetes with high blood sugars and a very high risk of heart disease.  If a person eats to much sugar and happens to be born with a decreased ability to develop new normal fat cells which are usually just under the skin, the fat in the liver and other internal organs can increase dramatically without the person looking obese.  This is called TOFI (Thin on the Outside, Fat on the Inside) and these folks are at high risk for the ills of diabetes, heart disease, cancer, Alzheimer’s etc.  The secret to curing NAFLD in as little as 2-3 months is a Low Carb, High Fat diet with intermittent fasting. 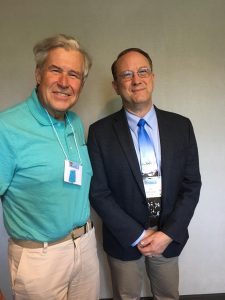 The  next to last speaker was my good friend Peter Ballerstedt a Phd Animal Agronomist.  One of his main points was that “we are not what we eat, we are what we do with what we eat”.  For instance high levels of saturated fat in the blood have been shown to be associated with heart disease but studies have show that eating saturated fat in the diet causes the blood levels of saturated fat to go down and the evidence is clear that there is no link between saturated fat in the diet and heart disease.  Increased consumption of milk and eggs by children has been shown to lead to improvements in growth and intelligence.  He pointed out that 40% of Americans do not get adequate protein in their diets by USDA standards.  In response to the argument that it takes 1.4 pounds of plant protein to produce 1 pound of animal protein he points out that due to the poor quality of plant proteins humans who eat 1.4 pounds of plant protein will only get 1 pound of usable protein so it’s even.  He said that more than a 1/3 of the earth was rangeland that would not support traditional agriculture but is great for raising animals.  He pointed out the fallicies in the argument that proper animal husbandry leads to increased global warming but indeed growing wheat was much more likely to leach CO2 from the soil.  With regard to grass fed vs. grain fed beef he noted there is very little difference in nutrition and that it was much better to have grain fed beef than grain fed humans.  When talking about pesticides in the meat and milk he said that almost all plants produce natural pesticides and that 50% of these have been shown to be toxic to humans.  With regard to the estrogen implanted cows he pointed out that the implants were set to run out before the cow went to the feed lot and that 8 ounces of an implanted cow ha 3 nanograms of estrogen versus 2 nanograms for a non-implanted cow, a trivial difference.  I second everything he said.

After Peter, Lawyer, Washington lobbyist, who survived a heart attack and reversed his diabetes with a low carb diet, Antonio Martinez spoke on lobbying efforts that are currently underway.  Most notably the “Nutrition Coalition” that has been formed by many leading low carb doctors and advocates.  They have an agenda in the form of an 11 point proposal to change the US dietary guidelines.  Rather than going into detail, if you go to their website they explain their goals in detail.  I have signed the petition.

Till next year, this is the Zero Carb Doc, signing off and thanks for reading my posts.