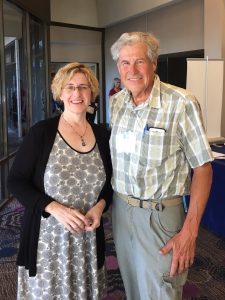 The conference began today with a lecture of particular interest to me on how to treat and prevent Alzheimer’s Disease with diet.  Dr. Georgia Ede started by reminding us all of the grim news we try to ignore that 1 in 3 adults will develop dementia and that there is no currently successful treatment for the condition in traditional medicine’s arsenal.  The good news however is that research is showing that the most common forms of dementia are likely caused by insulin resistance in the brain that dramatically interfere with the brains ability to use glucose.  Memory resides in the hippocampus of the brain.  Unlike the rest of the body glucose does not need insulin to get into these brain cells however insulin is required to properly burn glucose inside brain cells.  Insulin must bind with insulin receptors on the surface of the barrier that protects the brain called the “Blood Brain Barrier” and be transported across it.  The insulin receptors on the barrier can develop insulin resistance just like the ones in the rest of the body do when one develops Type 2 Adult Onset Diabetes.  When this happens the cells in the hippocampus of the brain are unable to burn enough glucose and this results in damage, decreased function and eventually the death of the cells involved in making new memories.  This is why so many researchers in the field are now calling Alzheimer’s Disease “Type 3 Diabetes”. Diabetes is closely related to Alzheimer’s disease as shown by the fact that either diabetes or insulin resistance can be shown in 80% of people who develop Alzheimer’s.  There is a nuclear medicine scan that can show in real time how much glucose is being burned in each part of the brain called a pet scan.  Scans have show that the more insulin resistant a person is the less glucose gets burned in their hippocampus, the area of the brain that malfunctions in people who have Alzheimer’s.  The good news is that the hippocampus in people with Alzheimer’s disease is still able to burn ketones and indeed things that help the body generate ketones like Coconut oil and MCT oil have been shown to improve function in people with Alzheimer’s.  Also using ketogenic diets and fasting, insulin resistance has been reversed in other parts of the body and studies are underway to see if that might be the case with Alzheimer’s disease.  But it’s best not wait until the insulin resistance has damaged the brain to start avoiding the high intake of carbohydrate that cause insulin resistance as PET Scans have revealed decreased ability to burn glucose in the hippocampus of people as young as 24 years old.  The good news is that some studies using a ketogenic diet to treat Alzheimer’s are already showing positive results like this study. 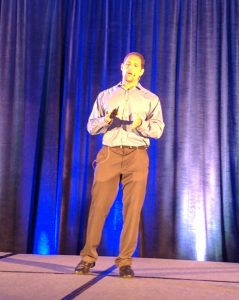 Dr. Dominic D’Agostino is a larger than life character in so many ways.  He has the body of a powerlifter and an intellect equally as powerful.  He works with Navy Seals and  NASA Astronauts on ways to make them more effective through the protective effects of ketosis.  One problem for the Navy seals is that when they dive very deep in the ocean they are at high risk of developing seizures if they stay down too long or surface to quickly.  He has a pressure chamber in his laboratory with high powered laser microscopes that can look at mitochondria while they are under extreme pressure.  He has found that certain ketone compounds when applied in these situations can decrease the risk of seizures by over 500%, more than twice the protection of any other medicine or treatment.  Among the benefits of a ketogenic diet he has found decreased free radical production in the mitochondria (the place in all our cells where energy is produced), decrease inflammation, and shortened recovery times after intensive physical training.  A ketogenic diet has been shown to increase the life span in animal models like the flat worm C. elegans which is often studied for this purpose.  Both of the next 2 speakers had praise for the importance and quality of his work.  He is obviously a highly respected researcher and follows a ketogenic diet himself which is probably what give him the energy and mental clarity to accomplish all that he has. 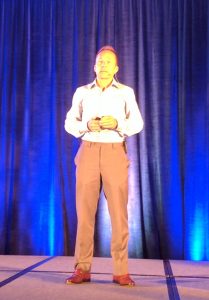 Next up was Dr. Jeff Volek another prolific researcher in the field of Ketogenic diets with a special interest in athletic performance spoke next.  He feel that the paleolithic record is clear that being in ketosis is the normal state for humans and probably a big part of what allowed us to develop our big brains.  His studies have shown many benefits of being in ketosis including decreased insulin resistance, no loss of the ability for muscles to replenish glycogen after exercise without eating carbohydrates, the development of more flexible cell membranes with a lower content of saturated fatty acids and a higher content of highly unsaturated fatty acids that promotes improved responsiveness of many cell membrane receptors for hormones and oher molecules, increased levels of growth hormone at rest, and improved recovery times after exercise.  And of course he also has done all this while following a ketogenic diet himself. 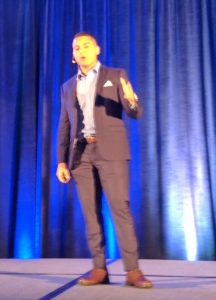 Dr. Jacob Wilson was the 3rd ketogenic researcher to speak.  Most of his research is done on rats and he has shown that given the same amount of calories and protein but varying the fat and carbs rats on a high carb, Western style diet develop much more of the toxic peritoneal (viceral/omental) fat than rats on a ketogenic diet and that adding additional ketones in the food decreases the deposition of this fat even further.   Being in ketosis causes the rats to make a larger proportion of  brown heat producing fat that burns off calories 24/7 to generate heat and help with weight maintenance.  In one human study subjects spent 10 weeks ketoadapting themselves the underwent a course of resistance training.  Their gain of both lean mass and strength were superior to controls.  In another study people on a ketogenic diet lost weight while improving their strength equally as much as the control group while the control group gained weight.  He has also studied cyclical ketogenic diets where intermittently the rats came off their ketogenic diet and has increased carbs briefly only to return to the ketogenic diet.  The rats on a pure ketogenic diet did not lose lean body mass and muscle building Anabolic Amino Aids (BCAA’s) went up.  In the rats on a cyclical ketogenic diet loss of lean mass was seen.  In other human studies it was seen that taking carbohydrate just before workouts tended to knock the participants out of ketosis.  In one rat study of balance being in ketosis improved a rat’s balance  by a factor of 2.  Along with his research partner Ryan Lowery he has written a new book “The Ketogenic Bible: The Authoritative Guide to Ketosis”.  All the proceed from the book are going to support research into ketogenic diets.   His parting thought was “A life is not important except in the impact it has on others”. 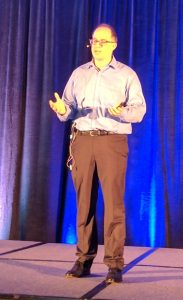 Keith Wayne Berkowitz, M.D., is the Founder and Medical Director of the Center for Balanced Health. He combines expertise in both traditional and complementary medicine. Prior to starting the Center for Balanced Health, he was the Medical Director and Business Director of The Atkins Center for Complementary Medicine. He was an associate of Dr. Robert C. Atkins since 1999.  He covered a lot of ground speaking first about his approach to diagnosing and treating Small Intestinal Bacterial Overgrowth Syndrome.  Approaches he considers are antibiotics, decreased alcohol use, berberine, oil of oregano, wormwood, grapefruit seed extract, Lemon Balm, Red Thyme Essential Oil, hydrochloric acid tablets, digestive enzyme supplementation, bile acid supplementation, and probiotics.  For repair he recommended L-glutamie, Zinc, Omega-3 fatty acids, Licorice, Aloe Verya, Vitamin D and the FODMAPS Diet.  He talked about the fact that many toxins are excreted from the body in the bile produced in the live so if you don’t eat enough fat the bile and toxins can stagnate in the biliary system leading to bloating, cramping and other gastrointestinal symptoms. 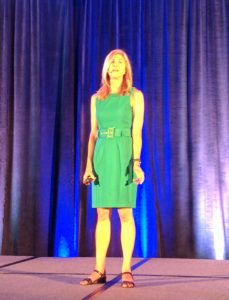 Dr. Nicole Avena was unable to attend due to bad weather on the East coast and so Franziska Spritzler a registered dietitian with an independent practice helping people with low carbohydrate diets spoke in her slot.  Ms. Spritzler bemoaned the fact that there was currently no route in the United States for someone to become a dietitian trained in low carbohydrate diets as there were no programs currently in existence.  She maintains a website called “The Low Carb Dietitian” with resources for people on ketogenic diets.  Her emphasis was the need to fit the diet to the individual and not try to fit one dietary approach to everyone.  She shared many of the various approaches she uses including various levels of carbohydrate, protein and fat intake.  She was very knowledgeable and professional in her approach. 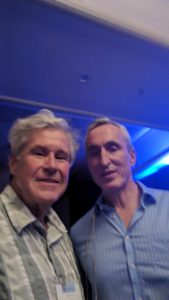 Having been low carb now for a little over 5 years and having read so much on the subject I can truly say that it was an honor to finally meet Gary Taubes.  It was his book “Why We Get Fat and What to Do About It” that finally convinced me to go Low Carb, High Fat in my own diet and inspired me on my low carb journey in 2011.  He has done an incredible amount of research and  painted a detailed road map of the flawed scientific judgments and the unforeseen catastrophic consequences of governmental interventions in the diets of millions of people all over the globe that led to the current worldwide pandemic of obesity, diabetes, dementia, cancer and heart disease that causing untold disability and suffering world wide.  I urge everyone to read his book “The Case Against Sugar” it could save your life and the lives of people you love and care for.  After reading his case the verdict of this juror is “Guilty as charged!”  He quoted the current head of the World Health Organization who when asked if she thought there was anything that could be done for the current diabetes epidemic said that she didn’t think so.  Well we need to make it our mission to let everyone we can know that there is a solution called a Low Carb, High Fat diet that can stop this scourge in it’s tracks and the only cost is educating people in how to eat.   Gary compared himself several time to Don Quixote charging at windmills.  I thought of the inspiring words from the Musical “Man of La Mancha”

And the world will be better for this
That one man, scorned and covered with scars
Still strove with his last ounce of courage
To reach the unreachable star

Let’s all saddle up our Rosinantes and let the world know that there is a way out of this mess.