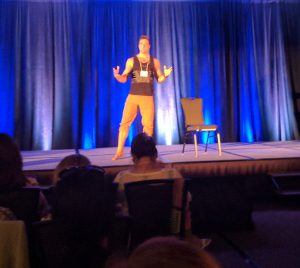 The day got off to a high energy start with movement expert Aaron Alexander explaining how becoming more active and improving our postures could help improve our health in many ways.  He said that movement allowed us to digest our food better and he emphasized the need to keep the normal inward curve in the spine when sitting.  He explained that this decreased stress by calming the Sympathetic nervous system. 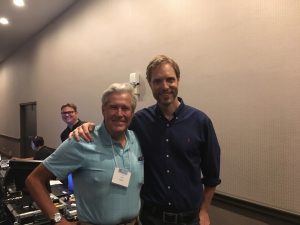 The next speaker was my friend Dr. Andreas Eenfeldt, a fellow Family Doctor from Sweden who began using low carb in 2002 in his own practice with great success and gave a concise history of the low carb movement around the world.  He explained how his low carb blog one of the earliest developed into the largest low carb blog on the internet.  I think the most important point he made was that modern doctors have tried to adapt their patient to eat an industrialized, processed diet through pills, injections and even bariatric surgery rather than adapting to the diet to the needs of the people.  One great thought that he expressed that applies so well to the low carb movement was “All the forces in the world are not as powerful as an idea whose time has come.” 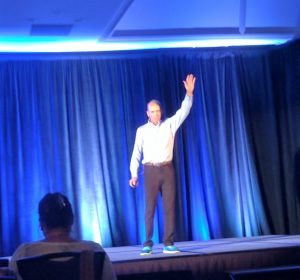 Dr. Joseph Mercola spoke next and covered so many subjects that it would be hard to list them all.  He feels that a person needs to vary their diet by for example eating low carb for a few days, the adding back carbs for a few days then fasting for a few days.  High Iron level as represented by an elevated Ferritin blood test were a particular concern for him.  He felt they increased free radical production and damaged the mitochondria.  He felt Infrared Therapy could help detox high Iron levels.  He, like the first speaker encouraged everyone to “move more” and do at least 15,000 steps every day like he did.  He feels that being positive for the Apolipoprotein E gene though it is correlated with an increased risk of Alzheimer’s disease is actually a good gene to have as it improves the chances for survival during fasting.  He did say that to avoid dementia people with the gene needed to fast regularly to avoid Alzheimer’s.  He warned of the danger of cellphone radiation saying it damaged DNA gated Calcium channels in cell membranes leading to high production of free radicals that in turn led to cancer, especially brain cancer.  He further went on to link the Cellphone generated free radicals to autism, depression, decreased sperm counts and difficulty in eliminating paracytic infections like Candida.  He advocated taking molecular Hydrogen to protect against the high levels of gamma radiation experienced when flying and said it has been shown to help 170 human diseases.  He included very few citations or references depending heavily on animal studies of which I am not a fan.  I think it is premature to act on these suggestions without further randomized testing.  I think more basic problems like excess carbs and sugar, low omega-3, high omega -6 intake and high stress lifestyles are the more likely culprits. 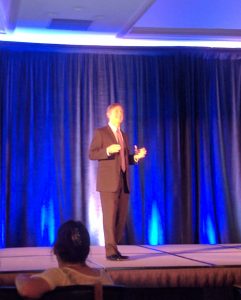 Dr. Eric Westman of the Duke Lifestyle Medicine  has a much simpler and in my opinion more effective approach to low carb high fat which I would describe as make it simple, clear and easy for the patient, then reinforce the message regularly with tracking visits and watch the magic happen.  He has kept careful track for the last 5 years and his patients have lost over 26,000 lbs.  Here are some of the conditions that Dr. Westman has seen improve regularly in his clinic and a low carb, high fat diet:  Both type 1 ad type 2 diaetes, Polycyctic Ovarian Disease, Irritable Bowel Sydrome, Acid Reflux, regained weight after weight loss surgery, and arthritis.  Here were some of the common sense recommendations he made.  Throw away the scale and lot at yourself in the mirror and see how your clothes fit.  Don’t count macronutrients other than carbs.  If you’re not hungry don’t eat.  You don’t need to exercise to lose weight.  You don’t need to monitor ketones.  The most common mistakes that he sees in people who have been doing low carb for a while are eating when they’re not hungry, eating because of social pressure, overdoing alcohol, not eating carbs but still eating too much food.  When asked if the fact that low carb diet decreased thyroid hormone production was a problem he felt that if the patient felt well and the thyroid levels stabilized at the new level then it wasn’t likely to be a problem.  The normal values for thyroid lab tests were based on blood taken from carbohydrate eaters and low carbers could easily just need less thyroid hormone. 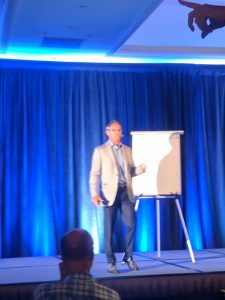 The final speaker was Dr. Daniel Pompa a Chiropracter with a particular interest in enviromental toxins, especially Lead, Mercury (especially the preservatives used in immunizations) and Glyposate (Round-Up) which he feels are the worst offenders and lead to weakness, “brain fog”, weight gain, loss of resistance to diseases, cancer and many conditions like Chronic Fatigue Syndrome, Irritable Bowel Syndrome, Fibromyalgia and underactive thyroid.  He presented many observational studies showing correlations between the various toxins and these conditions to support this but as all true scientists will agree correlation does not equal causation.  I personally am quite skeptical that the vitamin and herb mixtures he sells on his website can effect the removal of these substances from the body.  I still believe that most of the diseases he mentioned with the possible exception of underactive thyroid are more likely a physical manifestation of psychic stress as I wrote about in this post on Mind/Body illnesses.