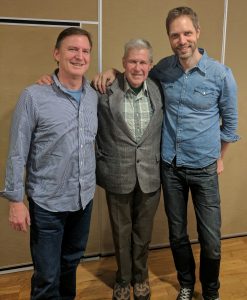 I walk in and there is Dr. Eric Westman, author of “The New Atkins for a New You” standing in the lobby.  I introduce myself and he asks me to sit down and talk for a minute.  He has several questions about my Zero Carb style of doing low carb and has nothing bad to say about the technique.  He is most concerned about his new passion, starting an initiative to train doctors and lay experts to help both teach low carb and in the case of the doctors to treat Adult Diabetes.  It’s called the Heal Clinics Initiative.  Boy do diabetics need this!

So we’re sitting there talking and who walks up but Dr. Andreas Eenfeldt, the awesome Swiss Physician who is the most prominent spokesman for the low carb lifestyle approach in Europe in my opinion.  He was nice and also asked me about my blog and  the zero carb lifestyle I personally follow and made some very positive comments about it.  He is currently working on a series of videos that aren’t available yet.  His site has tons of posts and videos on low carb that people can access for free. 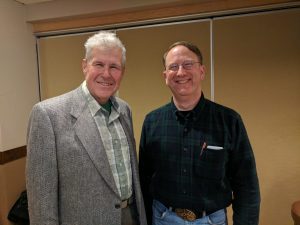 I had a really long talk with Dr. Peter Ballerstedt, a PhD Forage Agronomist.  He was such a knowledgeable and unassuming man.  I have been citing this video lecture of his for a long time when people would raise the argument that raising farm animals hurts the environment and is unsustainable.  He is an expert in this field.  He was also very positive on the idea of Zero Carb.  He has some great stuff on his blog Grass Based Health.  He gave me his card and encouraged me to contact him if I had questions about the benefits to the environment and best techniques of meat production.  I love networking especially with nice people like Peter. 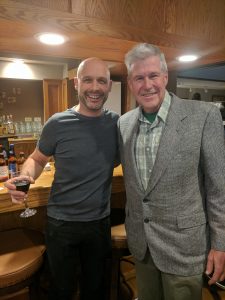 Many people with engineering backgrounds have made contributions to medicine.  In the case of “low carb” Dr. Richard Bernstein comes to mind.  He was an engineer on the team that built the first personal glucose monitor.  He had been a Type 1 diabetic since age 12  and knew the prognosis, even with the best treatments available was not good.  He did a lot of research on diabetes and it became obvious that encouraging diabetics to eat a high carb diet only aggravated the problem. He became a doctor and has been treating both type 1 and type 2 diabetes successfully using a low carb diet for over 30 years.  He is 82 years old and he is still full of vigor.  He has tons of video tutorials on his YouTube site which he calls “Dr. Bernstein’s Diabetes University”

The reason I mention him is that another Engineer has brought his logical, problem solving skills, free of the low fat indoctrination that all doctors undergo in medical school to the “low carb” field.  He has interviewed so many of the leaders in the low carb field and has a great way of stating in simple language the rationale for a low carb diet.  His blog is called The Fat Emperor. He was also very positive about my Zero Carb approach to low carb.  To the right is a photo of me and Ivor.

Some of the other people I talked to included Jimmy Moore who was my initial guide into the low carb world back in 2011.  He was just as nice in person as he seems to be on his blog and in the few emails we’ve shared over the years.  I didn’t get a picture with Jimmy, it seemed every body wanted to talk to him and I thought there’d be a lot of chances down the road.

I had shorter conversations with several other presenters and many attendees like myself.  At 8 I decided to leave because it’s an hour and a half drive back to Leadville, CO where I’m staying and I wanted to get this blog out and some sleep as I’ll have to be up at 5:30 to get there for the 7:30 start of the conference.  On my way to the door I see Dr. Zoe Harcombe one of my heroes who contributed mightily to the defense of Dr. Tim Noakes at his trial.  And as I’m walking out the door, Nina Teicholtz walks in.  Her book “The Big Fat Surprise” is a tour de force and a must read for low carbers.  Then I go out a different door than I came in, into the courtyard of this huge multi-building hotel complex and ask a gentleman pushing a luggage cart where the street exit from the courtyard is.  It turns out to be one of my all time heroes and someone who has been a low carb advocate and using it in his practice longer than just about anyone else at the conference, Dr. Ron Rosedale.  I chatted with him briefly, he also had the “low carb” nice person persona that all the low carb folks I’ve talked to seem to manifest.  Maybe we could end war if everyone went low carb 🙂

Please stand by for my Day 1 summary tomorrow and thanks for reading my blog, Paul