Can Eating Too Much Protein Stall Weight Loss on a Low Carb Diet? 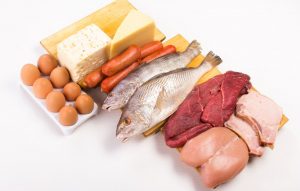 In the Zero Carb community (us folks who eat only meat, eggs, cheese and butter) there has been much controversy over whether there is a need to limit the amount of protein we eat.  I have followed many Zero Carb sites for the last 2 years that I have undertaken this way of eating myself.  There seems to be ample evidence that a large number of people are able to reach their desired weight and be vigorous and healthy eating all the protein they want often eating 2-3 lbs of meat per day or in some cases more with no weight gain.

My own experience was that my weight loss on a program of unlimited protein consumption stalled after 4-5 months and after about 4 months of no progress I was able to restart my weight loss by initially limiting my protein.  After much study the figure that seemed to be the most recommended by low carb doctors like Stephen Phinney and Eric Westman was to multiply the weight you wanted to weigh in kilograms by 1.5 and use the result as the maximum number of grams of protein you ate in a day.  When I did this I was able to lose another 20 lbs before plateauing short of my goal again.  The final piece to the puzzle for me was adding intermittent fasting which I won’t get into here but was the key that let me get to my ideal goal weight. 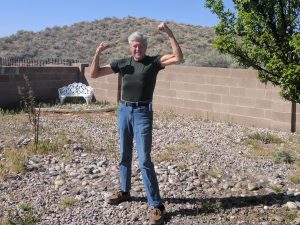 Many people have emailed me with the problem of stalled weight loss on Zero Carb and Low Carb diets and after deciding to limit protein have subsequently gone on to lose significantly more weight after doing so.

Here is my theory as to why some people who seem to have persistent resistance to insulin cannot tolerate high protein intake while other people can seemingly eat all the protein they want as long as they stay away from the carbs (and some lucky people can even eat all the carbs they want and stay at their ideal weight).

First I think there are many forms of insulin resistance.  We understand a lot about the development of insulin resistance but certainly not everything.  The common thing that happens in the 60-70% of all humans that will eventually develop first the Metabolic Syndrome and eventually Diabetes with the associated complications of a high risk of heart attack, stroke, kidney failure, loss of limbs, blindness and Alzheimer’s Disease among many of the complications of this progression if they eat a high carbohydrate diet is this – “Insulin Resistance” and insulin resistance inevitably leads to higher and higher blood insulin levels making it harder and harder to get the fat in fat cells out of the cells to be burned.   If you want to find out if you are insulin resistant or not click here to find out.  However, 10-20% of people seem to be protected somehow and are able to eat a high carbohydrate diet without this progression.  First this tells us that there is some genetic component to susceptibility to developing Insulin resistance – “We don’t all respond the same to carbs”.  I personally think though I can’t find any controlled studies on this that we don’t all respond the same to protein.

Here’s the scientific reason us insulin resistant folks can’t tolerate high protein diets.  After years of excess sugar or alcohol exposure fat accumulates in the liver leading to inflammation and insulin resistance.  It is at this point that people become insulin resistant and  carbohydrate and protein intolerant. When the blood glucose in our bodies begins to drop a hormone called Glucagon is secreted from the pancreas.  It tells the liver to start pumping out glucose. The liver has 2 ways to do this first we can store 1300-1500 calories worth of glucose in the liver in the form of Glycogen a starch that humans can make and  there is another 300-500 calories worth of glycogen stored in our muscles and kidneys. When the liver receives the signal from the glucagon excreted from the Pancreas in response to low blood glucose it begins breaking down the glycogen into its component glucose molecules and dumping them into the bloodstream this is called “glycogenolysis”.  The liver has another trick for upping the glucose called “gluconeogenesis” or making glucose out of the amino acids that are linked together to form the proteins in our body. Amino acids are just a modified sugar molecule, usually glucose with an ammonia (amine) group stuck to it. The liver chops off the ammonia and has enzymes that convert the remaining sugar molecule of 20 of the 22 amino acids to glucose raising your blood sugar.  In people who are insulin resistant there is another malfunction in the fatty, pus filled, inflamed pancreas. When glucose levels rise when you eat carbohydrates or protein the insulin rises. Normally the pancreas senses this rise and stops producing glucagon so the liver stops churning out glucose. Unfortunately in a metabolically damaged, fatty pancreas doesn’t respond to a rise in insulin normally because it is too insulin resistant and instead stopping glucagon production often pumps out even higher levels of glucagon than normal leading to increased levles of glycolysis, gluconeogenesis and thus higher blood sugar and insulin production leading to a bad cycle.  Here’s a quote from this article: “The problem is that when the beta cells give out, the alpha cells don’t give out as well. In fact, they often secrete even more glucagon than they would in a nondiabetic. Glucagon tells the liver to produce and secrete glucose, so the BG levels stay high even when you don’t eat.”

Most diabetes researchers focus on beta cells and insulin production, but some are studying the alpha cells and glucagon production as well. A recent study found that hyperglucagonemia (too much glucagon in the blood) actually precedes the decline in insulin secretion seen in diabetes.”.

Insulin resistance is caused by the same process that leads to fatty liver and fatty pancreas.  Once a person is metabolically damaged like this even the 50-75% of insulin release caused by a gram of protein compared to a gram of carbohydrate keeps the insulin level too high for fat to escape the fat cells and be burned.  Here are pictures of a normal pancreas and a fatty pancreas and the fat in fatty pancreas is up to 50% inflamed pus cells. 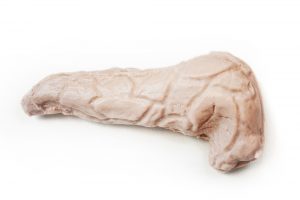 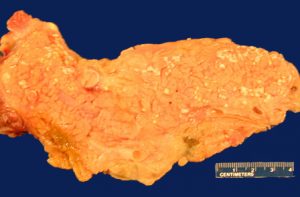 Again, I can’t find any controlled studies on weight loss on low carb diets comparing people who did and did not control the amount protein they are consuming and I doubt they exist so I am left with only anecdotal evidence.  But my personal theory is that first some people are born with more insulin resistance than others.  My best evidence for this is the 30-40% of people who don’t seem to become insulin resistant even on a high carb/sugar diet.  And second I feel that in some people permanent damage can be done in the liver and pancreas that somehow renders them less tolerant of the insulin generated by protein consumption.  I feel the group with either a high tendency to insulin resistance or residual damage to the endocrine system (liver, pancreas, spleen, kidnes etc.), a group into which I think that I fall can have problems with the lower levels of insulin release that proteins cause. 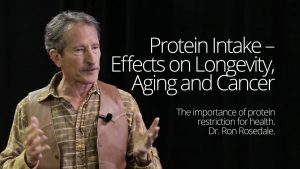 There are arguments that a high protein intake over values as low as 0.6 grams of protein per kilogram per day can hasten aging, increasing the risk of cancer and lowering immune resistance through activation of the mTOR system.  Dr. Ron Rosedale is one of the main proponents of this theory.  You can hear his elegant presentation of this theory here.  There is a lot of experimental data on animals to support it but no controlled studies on humans so it remains an unproven theory from my perspective.  Still I find the evidence strong enough to err on the lower side of protein intake. 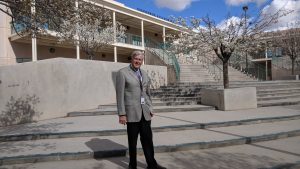 My personal position is that if you’re eating 2 lbs (32 oz) of meat a day you are getting about 224 grams of protein since meat averages about 7 grams of protein per ounce.  If you weigh 150 lbs (68 kg) thats 3.2 grams of protein per kg per day.  If you weigh 250 lbs (113 kg),  2 lbs of meat is still 2.0 grams of protein per kg per day.  So if you’re eating more than 1.5 grams of protein per kg per day and you are not losing the weight you think you need to lose to get to a desirable weight and have given it 3-6 months of an honest trial, you might consider a 1-2 month trial of limiting protein to 1.5 grams per kg of desired weight per day.   Many prominent low carb doctors recommend protein restriction in this range for patients who are not losing enough weight on carb restriction only.  It’s a year now since I wrote this post initially and which I updated today (4/5/18).  I have now remained at my ideal weight for 21 months on a zero carb diet employing protein restriction and intermittent fasting,  my health and vigor have been exceptional with no illness and even more energy and stamina than before I started protein restriction 2 years ago.  I have heard from at least 40 people who have reversed their stall on Zero Carb diets by implementing protein restriction and intermittent fasting.  Again if you are having great success with unlimited protein in my opinion you were either not insulin resistant or very mildly insulin resistant and were able to reverse it by eliminating carb.  Since it’s working well for those folks I see no reason to change their way 0f eating.  Here’s a link to how I limit protein personally.