Are You a “Skinny Diabetic”? 1 of 10 Diabetics Is Not Obese! They Are Called TOFI or MONW. 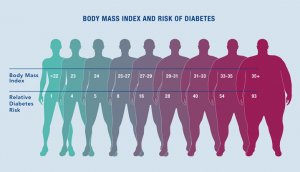 A Body Mass Index (BMI) of 25 is the most widely accepted definition of obesity although a person may have a BMI of 25 and have a very low % body fat if they are muscular.  Still in general it is a good estimation and it turns out as thr above illustration shows 1 out of every 10 diabetics has a BMI under 25.  There are two common names for this condition TOFI (Thin on the Outside, Fat on the Inside) and MONW (Metabolically Obese Normal Weight). 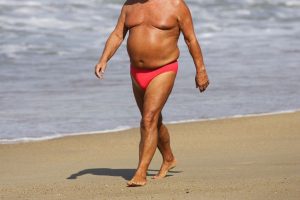 The secret to understanding why some people can develop the Metabolic Syndrome and Diabetes while remaining apparently thin is to understand the life cycle of our fat cells called “Adipocytes”.  Most people (not all) lose the ability to make new fat cells after the onset of puberty.  The other important thing to understand is that there are 2 main areas of fat storage in the body the peripheral fat (Sometimes called the Subcutaneous Fat) and the Central fat (also sometimes referred to as Mesenteric, Visceral or Omental fat).  We’ve known since French Researcher and Physician Dr. Jean Vague first proposed the theory in 1947 that people who have most of their fat in the “Central” storage area are at much higher risk of the Metabolic Syndrome, Diabetes and Heart Disease.  Here’s a quote from this article published in 1956 where Dr. Vague discusses this:

“Gynoid obesity, with lower body predominance, with poor muscle-blood development, is menaced only by direct mechanical complications of excessive adiposity: locomotor difficulty, abdominal pressure, limitation of respiratory motion, slowing of the venous and lymphatic circulation, cellulitis, lowering of energy, and reduction of the elasticity of the fat-infiltrated myocardium—complications which are all proportional to the degree of excess fat.

Android obesity, with upper body predominance and pronounced muscle-blood development, leads to metabolic disturbances. It not only is associated with premature atherosclerosis and diabetes, but it is also the usual cause of diabetes in the adult in 80 to 90 per cent of the cases. Gout and uric calculous disease generally appear in this form of obesity.”

Here’s a study published just last week in Korea showing that for people with a normal waist circumference, the Visceral to Subcutaneous Fat ratio was the best predictor of the metabolic damage caused by the metabolic syndrome. 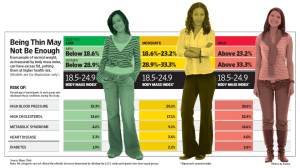 Depending on your genetic inheritance it takes more or less time before excess sugar and alcohol damage the liver and spleen enough to cause the Metabolic Syndrome and in some lucky people it may never cause it.  If you are in the “takes longer” category and were thin before puberty you may not have grown very many peripheral fat cells.  Then when you finally develop insulin resistance and your body needs to store all the extra fat that gets made It will run out of room in the safe peripheral fat quickly.  Because in insulin resistant people, fat can’t get out of its fat cell prison in the presence of the high insulin levels seen in insulin resistance they will soon see all their peripheral fat cells maximally full and have to start filling the unsafe central fat around the liver, pancreas, kidneys and other internal organs.  These Central fat cells quickly become engorged and then become inflamed calling in white blood cells to fight what they think is an infection and there they begin making inflammatory chemical that circulate in the blood stream inflaming the arteries in the eyes, brain, heart, kidneys, joints, and feet leading to many of the complications of the Metabolic Syndrome and Diabetes.  Macrophages, a type of white blood cell that usually fights infection have been shown to to make up almost 50% of the fat volume in obesity as shown in this study.  On the other hand peripheral fat cells don’t tend become inflamed in the same manner. 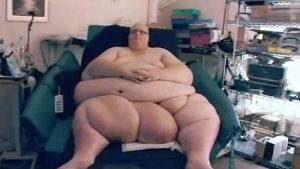 As you can also see from the above chart, 7% of people above a BMI of 35 don’t develop diabetes.  It clear these people are in the minority who can make new fat cells after puberty and in my opinion most of their fat must be stored in new peripheral fat cells sparing the central fat cells of which they may have very few.  They’re called “The Medically Healthy Obese”.  Here’s an article about them.   This gentleman weight 979 lbs.

So, bottom line, just because you are slim, it doesn’t mean that the metabolic syndrome isn’t brewing inside you.  There are 2 easy ways to tell if you are insulin resistant.  The first is to get a routine Cholesterol Panel done.  If it is done using U.S. style  units (mg/dl) you can simply take your triglyceride number and divide it by the HDL Cholesterol number.  If it is greater than 1.5 there is a good chance you are insulin resistant and you should proceed to the more sensitive HOMA-IR which is the test used to gauge insulin resistance in most recently done clinical trials.  If your Cholesterol Panel is in European Units (mmol/L) you can convert it to US units here.   To calculate your HOMA-IR you will need to have your doctor order a fasting insulin level and fasting glucose test to be done at the same time.  You then take these 2 numbers and plug them into a HOMA-IR calculator like this one on the internet.  If yours is greater than 1 then you should be concerned and consider a Low Carb, High Fat diet even if you are not overweight.

If you missed my last post on Low Carb, High Fat Diets and Sexual Potency in Males  you can view it by CLICKING HERE.